You are here: Home / Water Damage Restoration / El-Nino Strikes Another Blow Against Texas

Review Our Client Feedback on Google

In late October El Nino sent a huge weather system across Texas that produced heavy rainfall and powerful thunderstorms. Texas has seen record rainfall, heavy flooding, and thunderstorms that produced tornadoes across the State. Parts of Texas got as much as 20 inches of rain. As many as six tornadoes rampaged through the area South and East of Houston. 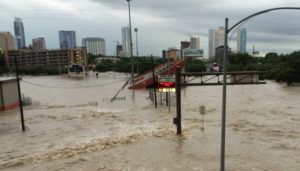 Autos Washed Off the Road

Victims have been washed off the road in their automobile by rushing flood waters. Bodies were recovered in San Antonio, Austin and Houston from flooded waterways. Parts of I-35 South of Austin were closed by flooding. We had multiple water rescues in Austin and around Travis County. Multiple residents were rescued from the rooftop of their house. Austin Fire Department deployed boats to help with rescues.

The High Cost of Flooding

October 2015 is now Austin’s record setter, 22.08 of rainfall recorded. 14.54 Inches of that record fell in one day. The total flood damage restoration for Texas could be as high as $3 Billion.

I remember the rain El Nino sent us in ’93 but I don’t remember the flooding and damage like we are getting now. It was a pretty devastating end the 2015. What I fear is, El-Nino is not done with us yet. We could have more of these powerful storms coming in the months ahead. I see more storms hitting the West Coast, flooding many cities there. Hopefully as the storms move to the east they will miss us.

Be Prepared for Disaster